To manufacture our clock planks with the minimum thickness of two inches are used. The planks are carefully graded: internal defects, cracks, knots are not admissible. Defective planks may split during the processing which will result in the loss of the required strength characteristics and impossibility to serve the user for a long time. 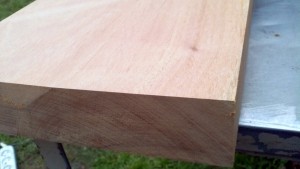 The body is milled from the solid wood on a numerically controlled machine. Then the body is ground, polished and covered with two different oils to protect the wood against moisture and intensify its colour. The finishing oil coating has a high gloss level and makes the surface look more varnished but, unlike varnish, it does not hide the wood streaks preserving its original look. 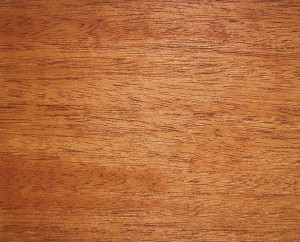 The term “mahogany” is used to designate different woods of reddish colour. This word may refer to a large group of woods counting 15 different tree species.

The mahogany texture is usually straight, the wood has no hollows or inclusions. Its colour is reddish-brown but it becomes darker as the time passes, when polished the wood glows in a pearly manner with a reddish colour. This wood is well processed and very much resistant. These properties make the mahogany one of the preferred wood species for making furniture and musical instruments.

The mahogany is used for making percussion instruments due to its ability to produce very dark warm sound. The famous Beatles sound was made by mahogany-body Ludwig Drums. Nowadays several drum manufacturers re-discovered the properties of mahogany bodies which resulted in the marketing of several high-end drums with the bodies made of this wood.

The mahogany is widely used for the manufacture of electrical guitars which was pioneered by Gibson Company. Mahogany guitars are often used by hard-rock musicians. 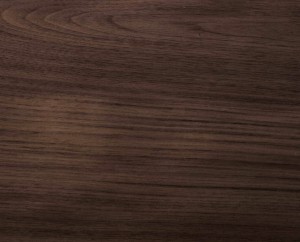 The Brazil nut tree is the most stable exotic wood species for the Russian climate. The tree grows in a similar climate and therefore easily withstands temperature and humidity variations.
The nut tree texture is elastic and therefore not subject to warping or fissuring like some exotic species. The nut tree structure and colour strongly depend on the soil, climate and other conditions but anyway the wood is always exquisitely beautiful. Due to the fact that the kernel part colour is not uniform the resulting surfaces have an elaborate and sophisticated motif and peculiar lights and darks appreciated by the connoisseurs. The Brazil nut has rather a dark wood with streaks as dark as chocolate colour. The nut tree elastic and strong wood is very much stable to moisture is easily processed with any tools, polished, painted, stained and glued.

Nut tree wood is used for exclusive gunstocks and butts, in the design of the houses (floorboards, wall panels), furniture finishing and even for car interior design. Even the best furniture and some details of concert grand pianos are made of solid Brazil nut tree. Helicopter rotor blades are also made of nut tree wood.

The popularity and value of this wood is confirmed by the famous Russian idiom “to carve somebody like a nut tree” now meaning “give it somebody hot”. Nowadays it has a negative shade but originally its sense was absolutely different, it used to mean that everything was done thoroughly, with a high quality, it was a praise expressed by old-time masters – arkwrights and antiquers. 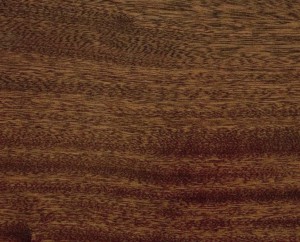 Sapele is one of eleven Entandrophragma genus trees, Meliaceae family. It grows only in the African tropical zone. Quite often due to its properties close to those of mahogany sapele is called African mahogany.

In terms of colour sapele wood is very much changeable — from light-pink to reddish-brown, glossy and very much decorative. Some saw-cut sections have mild contrast striped pattern. After the varnish application some wood pores may look like light dots barely visible against the common background.

The sapele has a high strength and hardness substantially exceeding those of the red mahogany. It is well processed both manually and with the machines, though the fiber irregular curly grain slightly complicates the processing. It is well glued and pickles and excellently polished.

The wood is resistant to fungi, mildew and timber worms. It is rather well resistant to moisture but direct contact with the ground is not recommended.

It is widely used in many industrial and household applications. Mostly it is used for the manufacture of the decorative veneer and floorings — block parquet, terrace and parquet planks. Excellent interior staircases, carved items and luxury furniture is made of sapele wood. In ship-building it is used for decks and flat top barges, cabin interior finishing. Sapele solid wood is used for making exclusive furniture. A substantial amount of the wood is used for smaller items: gun stocks, billiard cues, knife and pistol handles, car interior design, decks and fingerboards of the musical instruments. There are also some unusual areas — carved and turned draughtsmen, chess figures, frames, vases and even cases, bodies for monitors and PC system units, accessories — computer mice and USB memory sticks!