AiV Nixie clocks are equipped with a built-in GLONASS/GPS satellite navigation system signal receiver for the time and date synchronization. GLONASS/GPS satellites transmit the exact time by which the clock automatically synchronizes its time. In AiV Nixie clock a Fastrax IT530M, receiver based on MT3333 chipset is used. Receivers on this chipset have a low power consumption and a high sensitivity. 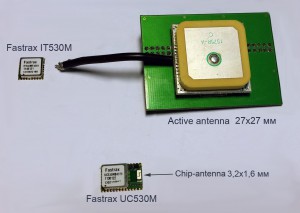 But even the absolutely best receiver does not work without an antenna. As a rule, even more depends on the antenna than on the receiver. Due the fact that the satellite signal is very weak, a good antenna is necessary. An active antenna is extremely desirable. Tube clocks quite often make use of small-size solutions with a built-in antenna, like in Fastrax UC530M receiver. This antenna is capable of “seeing” satellites only outdoors. Even in the car the reception quality is poor. During AiV Nixie development the long-term experience of the design of GLONASS/GPS devices was used. Our experience shows that a sufficient reception quality is provided by antennas with the overall dimensions of minimum 20 х 20 mm. The optimum solution is the application of active ceramic antennas (with a built-in amplifier). For the application in poor satellite visibility conditions a dedicated reflection polygon behind the antenna is required. In AiV Nixie clock, alongside with Fastrax IT530M receiver, a 27 x 27 mm ceramic antenna with a 50 х 37 mm polygon for a stable satellite signal reception in complicated conditions is used.